The Economic Impact of Aerolíneas Argentinas 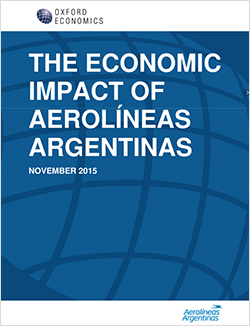 This report, produced by Oxford Economics, explores the scale and nature of the economic benefits that Aerolíneas Argentinas brought to the Argentina economy over the period 2012-2014. In addition to the benefits to the local economy from Aerolíneas’ operations, the study also examines the economic contribution that stems from its role in sustaining the travel and tourism industry, resulting from the spending of travelers transported by the airline. This benefit is broken out into broad sectors of the Argentinian economy, and presented in the context of the Argentinian economy as a whole.

We examine this contribution through three core channels stemming from its activities—direct, indirect and induced. The economic impact of an airline goes far beyond its operational and capital expenditure footprint. The services Aerolineas offers facilitate a wide range of economic activity elsewhere in Argentina – enabling business interaction, foreign investment, trade, and, in particular, making an economic contribution through the tourism spending of the visitors who travel to and within the country on its services.​