The Fiscal Impact of Immigration on the UK 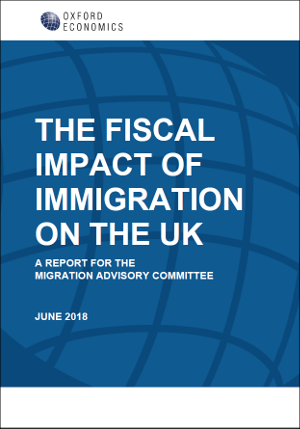 European migrants living in the UK contribute £2,300 more to public purse each year than the average adult, suggesting a net contribution of £78,000 to the exchequer over their lifespan in the UK.

In preparation for Brexit, the government asked its Migration Advisory Committee (MAC) to report on the economic and social impacts of EU migrants in the UK. The MAC commissioned Oxford Economics to analyse the fiscal implications of immigration using the most up-to-date data and sophisticated modelling techniques.

The resulting study, The Fiscal Impact of Immigration on the UK, represents the most comprehensive assessment to date of the net contribution that all migrants make to the UK’s public finances.

The study finds that

Our economic consulting team are world leaders in quantitative economic analysis, working with clients around the globe and across sectors to build models, forecast markets and evaluate interventions using state-of-the art techniques.