An important question that we at Oxford Economics address in many forms is the extent to which the Covid pandemic, the Russian attack on Ukraine, and the global surge in inflation resulting from both have changed our views about medium-term prospects. The table below provides an example: It lists the major European cities that in December 2019 (just before the pandemic) we thought would top the five-year 2020-24 GDP growth league, and how our views have changed since then. 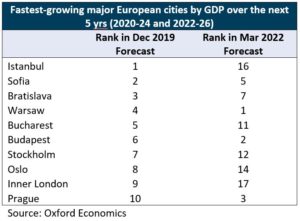 Clearly we have made some sharp downgrades. Istanbul was at the top of our league table at the end of 2019; we projected the Turkish capital would see 3.7% annual GDP growth over the years 2020-24. And it did indeed do remarkably well in the early stages of the pandemic, with only a fractional GDP fall in 2020 and an impressive 12.8% rise in 2021. But that is not sustainable, particularly since Turkey faces some big macroeconomic and financial challenges that will tend to drag down Istanbul’s growth rate. We now forecast that over the coming five years (the period 2022-26) Istanbul will grow by only 2.7% a year in GDP terms, putting it in 16th place among the top 35.

Formerly fourth-place Warsaw now claims Istanbul’s top spot. We currently expect it to grow by 4.2% a year over the next five years. Back in December 2019 we forecasted the Polish capital would see 2.7% a year growth in the 2020-24 period. That’s a big uprating, and especially impressive because the projection is not dominated—as many forecasts currently are—by a single strong 2022 figure. We think that 2022’s 4.6% rise in GDP in Warsaw in 2022 will be followed by the same rate of growth in 2023, with more strong years to follow.

One reason for confidence is that back in 2020, when the pandemic first struck, Warsaw’s economy held up rather better than those of most European cities. Warsaw’s GDP fell by only 3.9%. In contrast to our view on Istanbul, we think this may be a sign of things to come. The Polish capital has a large information and communications sector, and has attracted lots of back-office jobs that have proved to be relatively robust, thanks to remote working. But what matters most, looking forward, is that Warsaw has a well-educated workforce, with 62% of workers educated to degree level. The European city average is only 42%.

There is another city that particularly stands out from the table in terms of how its place in the rankings has changed. Like Warsaw, Inner London has a highly educated and young workforce. Before the pandemic, Inner London was a top-ten European city for forecast growth. Now, it only scrapes into the top half of the league, in 17th place. We forecast 2.7% annual GDP growth for the UK capital from 2022-26. The situation is not as bad as it appears for London because our European GDP growth forecasts are closely bunched together. Another percentage point on its forecast average GDP growth rate, and Inner London would have held onto its place in the top ten. On at least one measure—creation of jobs that are normally office-based—London remains Europe’s stand-out city, as the chart below shows.

Asia’s food inflation to peak in Q3, but not at alarming levels

Food inflation in Asia ex-China has risen 2.7ppts to 4.5% since October 2021. We expect the uptrend to continue into Q2, and perhaps even early Q3 for some economies.