It’s not every day that a top executive at a major technology company calls for more regulation. But that’s exactly what Kent Walker, president of Global Affairs and Chief Legal Officer at Google and Alphabet, did recently when he called on the EU and the US government to finally sign off on a replacement agreement for the EU-US Privacy Shield that was thrown out by a European Court in 2020.

“The stakes are too high—and international trade between Europe and the US too important to the livelihoods of millions of people—to fail at finding a prompt solution to this imminent problem,” Walker wrote in an early-2022 blog post, after an Austrian court affirmed the ruling and just before France followed suit, with other EU nations expected to follow.

Alphabet and other US multinationals are right to worry. The so-called Schrems II decision, named after the activist who provoked a legal showdown over privacy, shattered the framework that defined what US-based companies must do to protect personal data flowing across borders, and left them at the mercy of European regulators who could at any time question their data protection practices. The case at hand involves the popular Google Analytics service, but the implications extend to the entire digital economy.

Interrupting the flow of data can have broad economic impact. According to research cited by the Congressional Research Service, restricting data flows between countries by just one percent can reduce gross trade output by 7%, slow productivity by 2.9%, and boost downstream prices by 1.5% over five years.

EU policies are one of many privacy issues besetting Big Tech, with Apple’s with strong stance on user tracking by advertisers blamed for Facebook parent Meta’s whopping loss last quarter—the second quarter in a row that the social media giant was rocked by a slowdown in growth. In terms of stock prices, at least, Apple so far packs more punch than the EU.

But the tensions between Europe and the US are serious, and anyone counting on quick regulatory relief may be disappointed. US government surveillance practices are at the heart of the matter, and those do not change easily. Most companies, meanwhile, are not ready for the bumpy ride ahead: Less than one-third of respondents to a recent survey for NTT DATA say their businesses are prepared for public policy changes. 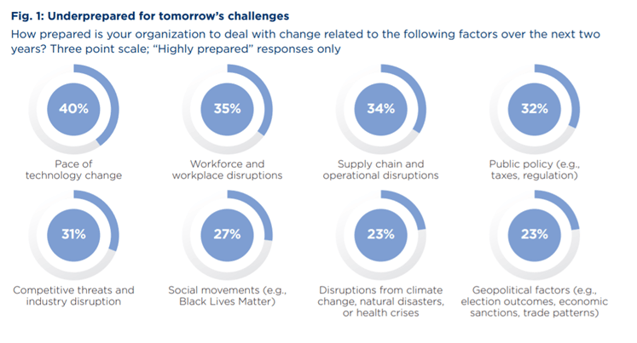 In lieu of a new agreement, there are steps US multinationals can take to protect their data—and their bottom lines—from the long arm of regulators, and knock-on effects that could echo across the global economy:

The demise of Privacy Shield protections has not provoked the dire consequences organisations feared—yet. But as the world awakens from the inertia of the pandemic and heavyweights like Apple flex their privacy chops, US companies would be wise to act now to protect themselves.

Innovation Index: Are You Prepared to Shift from Survival to Growth?

Oxford Economics and NTT Data fielded a survey of 1,000 North American business and IT executives in 2022 to uncover future strategies to mitigate disruption.

Reinventing for growth in a changing media landscape

Oxford Economics partnered with Accenture to survey 6,000 consumers around the world about their media and entertainment habits, experiences, and preferences.

Oxford Economics specializes in characterizing the impacts of data centers.