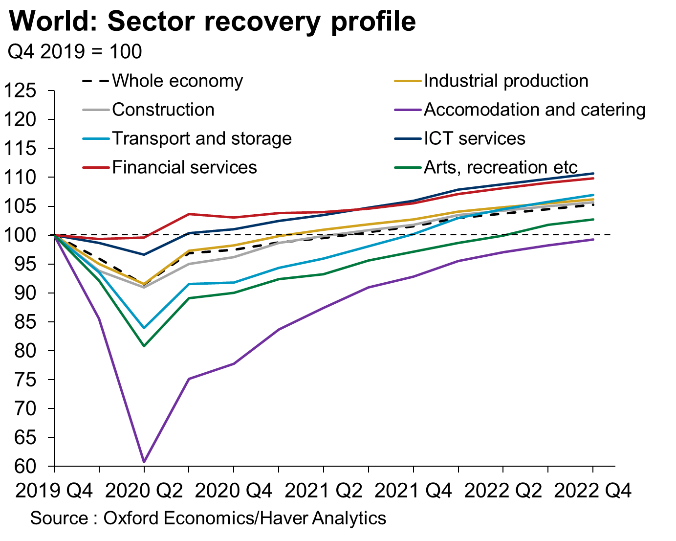 Responding to my colleague Ben May’s recent piece on the key macro themes driving the 2021 economic outlook, this blog looks at the key sectoral themes for the post-covid world. Overall, we believe the pandemic will have a lasting impact on the behaviour of individuals and firms’ business models. Some shifts will leave permanent damage on sectors, whilst others will open up opportunities in 2021.

Digitalisation to persist, supporting sectors such as healthcare, finance, and e-commerce

First, the pandemic has accelerated the shift to digital with respect to how companies and individuals work, spend, and interact with each other—a trend we expect to continue into next year. One example of this is in the healthcare sector, where routine appointments in several advanced economies have been carried out remotely since the height of the pandemic. Many healthcare providers, including the NHS in the UK, plan to make some of these changes permanent—a positive development for the sector that will allow health professionals are able to see more patients a day.

A reversal of globalisation is unlikely

Second, a lively debate this year has been whether the pandemic would lead to a reversal of globalisation and a wave to move production closer to home. We think the pandemic is likely to dampen globalisation, we don’t expect a reversal at an aggregate level. Firms may look to move production closer to their markets, but such shifts take time, so are unlikely to be widely seen in 2021. For instance, in the automotive sector, cars are often manufactured on multi-year cycles. And the appetite for globalisation remains strong especially in Asia Pacific – last month the ASEAN economies signed the largest trade pact in recent history, the Regional Comprehensive Economic Partnership, which includes 15 countries that account for 30% of the global population.

Still, we think certain sectors, such as air travel, will become less global. Tourists will probably stay closer to home next year, and businesses will replace some overseas travel with online meetings. This position is worrying for industrial suppliers supporting long-haul travel, such as Boeing and Airbus. There are relatively limited alternative uses for commercial aircraft compared with capital in other sectors (such as unused office space which could be converted to flats or other facilities), creating a risk that some planes may be permanently retired rather than redeployed for other productive uses.

The recovery will jump-start the clean energy shift

Finally, the recovery offers an opportunity to jump-start the clean energy shift. Notably, 2021 looks to be the year when hybrid and electric vehicles break into the mainstream, especially in China and Europe. This matters for automotive suppliers. For instance, electric vehicles have less mechanical complexity and require fewer moving and wearing parts relative to traditional petrol or diesel vehicles. The absence of the cylinders, pistons, valves and gears that form the core of a traditional powertrain reduces the need for machined parts in a pure battery electric vehicle. But battery demand is likely to buoy some chemical manufacturers, and rapidly developing battery charging infrastructure will create new revenue streams for utility companies and commodities such as copper.

The end of the pandemic is likely to mark have a lasting impact on society, and several sectors of the economy. Such changes should be embraced, and we should begin planning now – if you haven’t already – for the transformation ahead.

What the pandemic tells us about the risks to growth

Global economic uncertainty remains elevated, despite an easing in concerns about the fallout from war. Evidence suggests risks to growth are significantly greater than prior to the pandemic.

The short-term outlook for China's major cities has deteriorated further since our last release in March. While the global surge in inflation is not being felt to any significant extent in China, the Omicron variant has led to more widespread and longer lockdowns—hammering consumer spending and the activity of the most vulnerable, consumer-reliant, sectors.