Over the last year and a half, many office workers have decided they can work from almost anywhere with a desk, a decent internet connection, and enough space. People say they are just as productive at home as when they are in the office. If so, then maybe rural towns and villages can now compete with the big city, when it comes to productive desk-based working. Perhaps cities will no longer be the great drivers of growth?

There may be lessons to be learned from recent history. A decade ago, the hot topic was broadband and whether it could help remote and previously under-performing local areas raise their competitiveness—reversing a centuries-old pattern in which the most remote places tend to have the lowest incomes per head.

It was hoped that for employers and workers in such locations, broadband would help to overcome the problems of remoteness. Better digital connectivity would lower costs, and it would enable innovation, for example by making it easier to collaborate. Plus, broadband would allow for more flexible patterns of work, including working at home, in areas where travel to work can be very problematic. And broadband would lower the barriers to starting a business, boosting rural entrepreneurship. Much of this sounds very similar to the debates we are having today; the motivations are different, but the arguments are very similar.

Rural areas have lower income per head than urban areas: evidence from the US, 2019 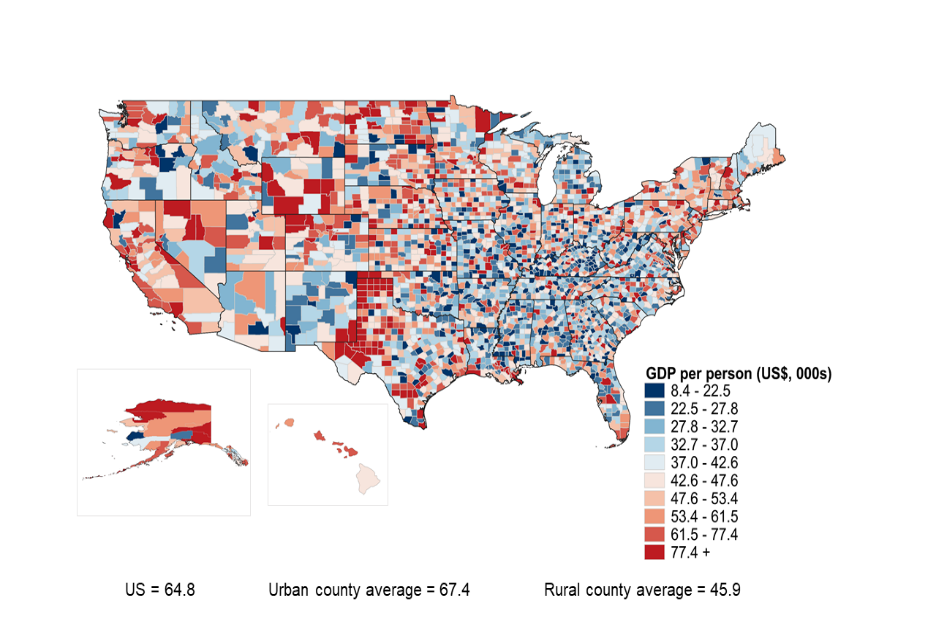 What were the outcomes? The What Works Centre at the London School of Economics has examined more than 1,000 research papers on the subject, whittled them down to just 16 that follow robust methodologies—half from the US and half from Europe—and has drawn some conclusions. It finds that when broadband was introduced into a local area it sometimes raised companies’ productivity, but not always and not necessarily by much, with a lot depending on whether complementary investments were made, and on the skill levels of those involved.

A study in the US, reviewed by the LSE team, showed that spreading broadband to rural counties encouraged the formation of new local businesses—but only for the least remote areas. Proximity to a city was still a vital driver of company formation, even though the new technology was supposed to facilitate remote working. Similarly, a UK study found that broadband actually did more to stimulate urban economies than rural ones, when all other factors were allowed for—suggesting that digital contacts do not fully replace real ones.

More positively, one study found that expanding broadband into a location had a positive impact on women’s participation in the labour market. And crucially, there was evidence from some studies that providing broadband to a local area might encourage suitably skilled people to move to it—which may be closely analogous to the post-pandemic case of people leaving their city offices to work in a semi-urban, rural, or remote seaside location.

Of course, the adoption of broadband a decade ago is not identical to the possible spread of remote working today. But that does not mean it tells us nothing. First, distance does not die, as a recent Oxford Economics Research Briefing confirms. Second, while new technology may open up opportunities, it particularly increases the options available to those who, thanks to their professional or technical skills, are already in the strongest position in the labour market.

There is a lesson for policy makers, too: don’t assume that “working from home” will solve all the problems of remote rural communities. Government agencies should continue to encourage and support online business communities, linking together those in cities with those in rural communities, using the new digital technologies to provide forums for exchanging ideas and opportunities, training, and help with technical matters such as product standards. The aim would be to build business networks that jump geographical boundaries. Government’s role would be catalytic: getting the networks in place, then watching them grow. The cost would be low, the potential large.

Like in other major economies, we expect inflation in Japan to remain elevated in 2022 – we project Japan's inflation rate will hover around 2% y/y over the year.

US tech sectors and tourism will drive metro job growth

Metros that have lagged others in the pace of the recovery thus far will see the fastest growth in 2022, but the medium-term outlook favours the tech-heavy metros.

We forecast that as the distortions from the pandemic subside, employment growth across Europe's major cities will generally outperform national economies in the years to 2026. Evidence that city population dynamics are reverting to pre-crisis trends, combined with a favourable sectoral setting, underpins this.